Opening with lush keys submerged in shimmery reverb, natural ambiance and a distant echoey pad, “Moments Lost” by Wandr (ft. Autumn Glow) sets the scene for what can only be described as the start of one beautifully mysterious chillhop journey.

Just as you expect everything to reach its destination, the ever-growing bassline comes to an end with a pleasant tape stop. Strap yourself in, the journey has actually just begun.

Foley textures, distant melodic elements, mysterious phrase, reminiscent of a human voice trying to reach you from afar – the whole deal. What used to sound like the musical equivalent of a cinematic scene where the main character just wakes up with a gradual deep realization, has now become the soundtrack of the character’s constant state of mind – mystery, melancholy, bitter-sweet pensiveness.

The self-titled track from the 3-song EP, released through Insight Music, presents Wandr and Autumn Glow as two truly impressive new chillwave artists, whose music I can’t wait to dive more into, and I encourage you to do the same!

Be sure to give the whole Moments Lost EP a listen, you’re in for a seriously beautiful ride! 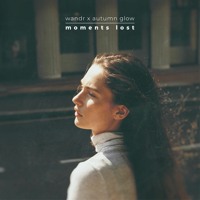