“Leave A Light On,” from Modest Mouse’s upcoming album, The Golden Casket, has landed.

It is the second single from Modest Mouse’s anticipated seventh studio album. It follows a new wave tune “We Are Between,” which came out earlier this month. “The song finds [singer Issac] Brock navigating the existential threat of losing our humanity — and the interconnectedness that come with it – amidst a constant societal barrage of physical and digital materialism.”

Additionally, you can see the song live, as the band has plotted an extensive 2021 U.S. summer tour, joined by special guests Future Islands for a handful of dates.

Using similar synth sounds and psychedelic beats as “We Are Between” paired with an earworm of a hook, “Leave A Light On” sets high expectations for the rest of the album.

Watch the “Leave A Light On” official visualizer below.

Although their releases may have been sparse in recent years, Modest Mouse is still one of the most consistent live bands around. Their tour kicks off July 29 at Lollapalooza in Chicago, and will see the band play a couple more festivals includingLife is Beautiful in Las Vegas and Austin City Limits. The band will perform shows at New York City’s Brooklyn Steel, L.A.’s Theatre at the Ace Hotel and Washington D.C.’s The Anthem. 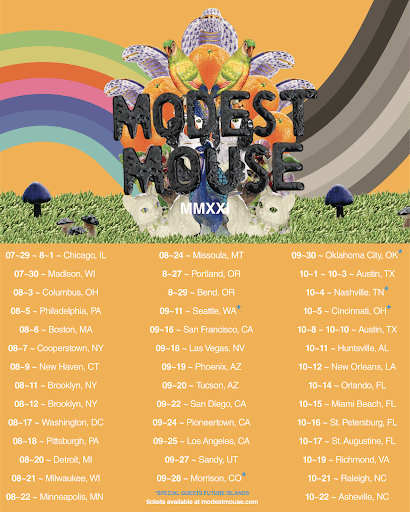