SAVE STEREOGUM: Donate to keep us in business and get our exclusive '00s covers album! 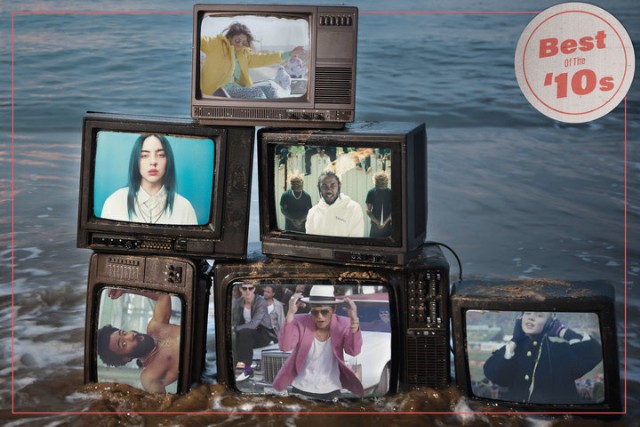 In the very early days of this century, people would still sometimes watch music videos on television. MTV’s Total Request Live was in its halcyon era in 2000, and the show wouldn’t be cancelled until 2008. Meanwhile, YouTube debuted in 2005, changing the way everyone experienced the music video. So the 2010s are the first full decade in the online era of the music video — the time when you could pull up whatever you wanted, whenever you wanted.

Videos could’ve easily outlived their usefulness by now. Why would a label blow a whole lot of money on making a mini-movie for a song, knowing full well that people would have to type the song’s name into a search engine to find it? And yet the opposite has happened. Music videos have utterly dominated YouTube as the platform has found a central place in our lives. Almost all of the most-viewed YouTube videos of all time are music clips. And when a video goes viral, people probably see it more times than they would’ve done even in MTV’s dominant era. People watch videos over and over, on repeat. That didn’t happen when they were on TV.

At the end of 2012, the South Korean rapper PSY posted his “Gangnam Style” video on YouTube. That clip — dizzy, cartoonish, infectiously dumb — might’ve been the perfect YouTube video. It transcended language, culture, and platform. “Gangnam Style” was the first YouTube video to hit a billion views, and it made an international celebrity out of a guy who was barely known in his homeland beforehand. Not even MTV could’ve done that for PSY.

So music videos are fine. They’re a crucial way that musicians broadcast their images, capture imaginations, and put their work into context. Even as attention spans further atomize, we can still spare four minutes at a time to watch pop stars do silly shit on our phone or laptop screens. The following list is entirely subjective, and it probably looks nothing like yours. It is also completely and indisputably correct. Here are the decade’s best music videos.

Now that she’s transitioned into movies and Vegas and sincerity, it’s important to remember how Lady Gaga began her decade: as a master of her own sleazily surreal sensibility. Virgin Mobile spent its product-placement money well.

The New York of 2010 is just as dead as the New York of 1971. This video is its deeply silly, cameo-jammed French Connection. Think of it as last lifetime’s party.

In front of our eyes, unspeakable tragedy merges with freewheeling fantasy, combining into one disorienting and beautiful and sickening whole. It’s fun to watch kids dance. It’s a whole lot less fun to think about a society so crushing that, for a whole lot of people, death and freedom can blur together.

In five and a half ecstatic, wordless minutes, we get an entire novel’s worth of character and community, and we see into a world that we might’ve never glimpsed otherwise. That’s what great filmmaking can do.

You could make a case that the phrase “splendor in the face of systemic oppression” sums up the entire history of black American music. With that in mind, it’s hard to find heroes more powerful than Le Sape Society, an entire subculture of South African township dandies. That’s why Solange’s “Losing You” video, filmed amidst that subculture, feels like the most glamorous thing in the world.

In the Chinese city of Tianducheng, you’ll find grand, ghostly replicas of the Eiffel Tower and the Champs Élysées. The Parisian director Romain Gavras uses those images as backdrop for large-scale, abstract messianic imagery. Try to find a drone shot more dazzling than the one that ends this video.

For his grand entry onto the national stage, A$AP Rocky presented classic New York rap iconography as something fashion-forward and gallery-ready. It was exciting then, and it’s exciting now.

A lovingly choreographed high school musical with footwork breaks, elegantly assured camera movements, and a no-shit star performance at its center. Simultaneously the cheesiest and the least cheesy thing Chance The Rapper has ever done — which, in both directions, is saying something.

Everything about this video — the choreography, the costumes, the sinking police car, the little kid dancing in front of the line of riot cops, the entire specter of post-Katrina New Orleans — is there to support what might be the greatest thousand-yard stare in pop history, or to give that stare the context it demands and deserves.

If you’re old enough, there’s a pretty good chance you remember the joy and confusion you felt upon happening across Missy Elliott’s “The Rain (Supa Dupa Fly)” video for the first time. The sight of Missy in that giant trash-bag bodysuit was a brain-shatterer, a real what the fuck is this and could you please inject it into my veins? moment. For those of us who don’t come from Spain and who don’t know shit about flamenco or Catalan culture, “Malamente” did something similar, bubbling up from the internet to grab all of your attention.

The Revenant is an OK movie and a bad Oscar juggernaut. But it’s important because it provided the inspiration for Quavo to shoot a bow and arrow while Takeoff wears an entire bear on his head. The “T-Shirt” video is a true achievement in the art of rap-music ridiculousness.

In The Exorcist, Linda Blair spider-walks because her character’s body has been possessed by the demon Pazuzu, a malignant force who wants to turn all that is innocent and pure into unnatural ugliness. In the “Bad Guy” video, Billie Eilish spider-walks because it’s fun and because she is our new great avatar of euphoric brattitude. Duh.

Donald Glover was a sitcom star long before he was a rap star. In “This Is America,” he turns his physical comedy gifts into weapons, casting himself as a symbol and symptom and victim of a bloodthirsty culture. That’s a hell of a trick.

With dream-logic panache, Grimes turns various temples to masculinity — the locker room, the football field, the motocross track, the moshpit — into playgrounds to dance through. And the various dudes all join in because it ain’t hard to tell that the playground is superior to all that other shit.

Almost every frame in the “Humble.” video could be a painting, or a tattoo. And yet those instantly-iconic images all arrive with such speed and energy that your brain can barely process it. It’s art film as strobe light, and it’s overwhelming.

The cultural assembly lines of Seoul, where the music video has always been understood as a vital part of the pop-music experience, produced some truly eyeball-searing visions in the past decade. None was as purely dazzling as “I Am The Best.” Take the title literally: 2NE1 were here to tell the Western world that they could floss better than our rappers, dance and preen better than our pop stars, and rage out better than our punks. We never had a chance.

M.I.A. sat atop a speeding BMW that was doing a sideways wheelie, calmly filing her nails, not even flinching, looking like the coolest human being that has ever existed or will ever exist. What the fuck have you done with your life?

Julianna Barwick – Healing Is A Miracle

My Morning Jacket – The Waterfall II

In Case You Missed It