Something perfect for the moody March.

His first ever EP is called waiting for spring and embodies the feeling we’ve all been having while expecting those warm days. Enjoy it in full below: 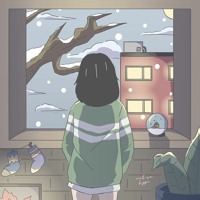