While participating in a fair in San Bernardino in 1961, Wesley Galyon was arrested by local authorities under a little-known section of the California Penal Code. Dating back to 1873, the law prohibited making money off the display of humans with “deformities,” and was invoked after a woman claimed she fell ill when she saw Wesley’s sons — Ronald Lee and Donald Lee Galyon, both aged nine — at the show. Born on October 28th, 1951 in Dayton, Ohio, the twins — known as Ronnie and Donnie — weighed a combined 11 pounds and 11 ounces at birth and were joined at the abdomen.

Each brother had his own set of arms and legs, as well as an individual stomach, small intestine, and kidneys. But given that they shared one set of genitals, one bladder, and one colon, doctors were not able to separate them at birth. Later in their lives, doctors told them that they could be safely separated, but the brothers — who had spent their entire lives face-to-face — weren’t interested. Ronnie and Donnie lived that way until they died from congestive heart failure on July 4th, 2020 at 68, as the oldest conjoined twins ever recorded.

Ronnie and Donnie’s six-decade career in entertainment provides a glimpse into how America still puts humans on display. They performed in sideshows from the time they were small children until their “retirement” in 1991. After that, they made a few appearances in sideshow’s modern equivalent: daytime talk shows and reality shows that feature people considered “curiousities” — like a family with dwarfism, or child beauty pageant contestants. It’s a genre of reality shows that, like a sideshow, gives audiences the opportunity to see people with different bodies that they typically don’t encounter in real life (like conjoined twins). The public’s perception of what’s considered shocking may have changed, but the questions surrounding consent, autonomy, and agency are still very much alive.

When the twins were born, Wesley and Eileen Galyon opposed putting their children on exhibition, despite having offers start to roll in since the day they were born. According to an interview with Wesley in the 1981 documentary Being Different, which features interviews with people with rare physical differences, the doctor who delivered the boys told Wesley and Eileen that they weren’t likely to survive. But after spending 20 months in the hospital for observation, Ronnie and Donnie went home. At that point, Wesley and Eileen realized that even if the twins weren’t officially on display, they would always receive attention from curious people. “We always said we would never do it, but we were constantly hounded to death of people wanting to see them,” Wesley said in Being Different. “Regardless of where they go, they’re on exhibition. This way they get something from it.”

This thought process isn’t uncommon. “Technically, I’ve always been performing, to a certain degree,” says Nati Amos, a pediatric infectious disease research associate and semi-retired sideshow performer from Brooklyn. Born with a rare condition known as amniotic band syndrome, which impacted the development of her limbs and other body parts, Amos has always looked different. Growing up in the 1990s, she saw sideshows included in rock festivals like Lollapalooza, and later, Riot Fest. “I ingrained myself in punks, especially riot grrrl, because punks did not care about what you look like,” she tells Rolling Stone. “A lot of people see sideshow the way that they see punk rock, or anything that goes against the norm. Here you had a culture where people were willing to set themselves apart by body modification and tattoos to say ‘I reject your notion of normal.’” When she appeared on the road or in the Coney Island Sideshow as the “Patchwork Girl,” she did everything from fire performance and skin suspension, to stand-up comedy and playing drums. “It allowed me to interact with the public in such a way that they thought they were getting something. But really, I was using them as much as they were using me,” she explains, noting how she used her sideshow earnings to pay her college tuition and other bills.

As a scientist, Amos has methodically considered the potential risks and benefits of the sideshow. “I think there’s a very fine line between exploitation and autonomy,” Amos explains. “The way that I approached it was like, ‘OK, I have 10 minutes to change these people’s minds. They’re going to walk into this theater with their baggage of what they think they’re going to see — and I’m going to take it and turn it on its head.’ And for the most part, it worked, and it helped me confront my own internalized ableism.”

According to Marc Hartzman, who wrote about Ronnie and Donnie in his 2005 book, American Sideshow: An Encyclopedia of History’s Most Wondrous and Curiously Strange Performers, the twins also “didn’t hate” their time in the spotlight. “I think for them it was a way to earn a living,” he says. Through years of performing on the sideshow and fair circuits they made a comfortable living, including purchasing their own house outside Dayton, Ohio after they retired. Like other performers with physical differences, Ronnie and Donnie didn’t have many other opportunities to make this kind of money. Hartzman says that many sideshow acts saw it as being preferable to what used to be a common alternative: institutionalization. 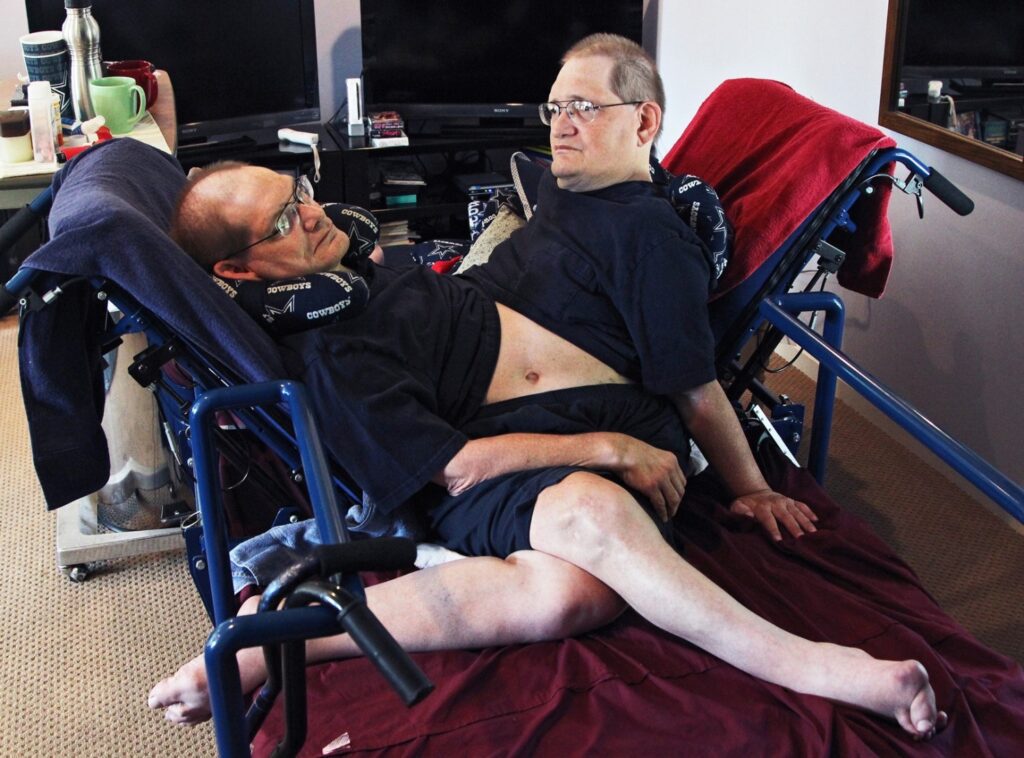 Donnie, left, and Ronnie Galyon sit inside their Beavercreek, Ohio, home in July 2014, shortly before they broke the record for longest-living conjoined twins.

Though many people associate sideshows with their heyday in the mid-to-late 19th century — with traveling circuses and showmen like P.T. Barnum — they were still going strong when Ronnie and Donnie started performing in the 1950s. But soon after as Hartzman points out, carnivals and circuses saw attendance dwindling as they had to compete with newer forms of entertainment like television and films. There was also increased societal self-awareness — or “political correctness,” as Hartzman describes it — that made people uncomfortable. “People were suddenly realizing that they didn’t feel comfortable going to stare at people who were different,” he tells Rolling Stone. In the 1970s and 1980s, Ronnie and Donnie took their act on the road outside of the U.S., touring Mexico and South America as circus headliners.

There are still a few remaining sideshows today, including at Coney Island and the World of Wonders touring show. Unlike other performers like Amos, or famous conjoined twins Daisy and Violet Hilton (subjects of the 2012 documentary Bound By Flesh, and the Broadway musical Side Show) who sang, tap-danced, and played a variety of musical instruments, Ronnie and Donnie didn’t have a special talent. Instead, their act involved people watching them sit in their trailer, doing everyday activities like playing checkers or watching TV. “They were just sort-of living,” Hartzman says. “I don’t think they were doing anything particularly exciting. They were just very unique to look at.”

This basic concept is still around today in the form of TLC reality shows like Little People, Big World, or My 600 lb Life. And the way Harztman sees it, there’s no difference between the original live sideshows and this type of modern reality shows. “It’s the same thing without the guilt,” he explains. “Now, I can sit on my couch and gawk and stare at people with these anomalies and not feel guilty, because I’m not looking at them in person, and they don’t have to see me looking at them.” In both forms, Hartzman says, the appeal comes down to the fact that we’re all innately curious, and curiosity will always sell. This was the case for Ronnie and Donnie, who were featured, for example, in a 2010 TLC TV documentary called The World’s Oldest Conjoined Twins Move Home.

Though the format has changed, people have never lost interest in getting a peek into the lives of people with different types of bodies. By the 1990s and early 2000s, it wasn’t uncommon for former sideshow performers to take part in the talk show circuit as well. For Ronnie and Donnie, this included being the subjects of a 1997 episode of The Jerry Springer Show. The appeal of talk shows of this era, Amos explains, was their ability to elicit feelings of both disgust and intrigue from audiences. “It was this warped sense of morality that would relieve people of their own life: that their lives could be worse; they could be born different and held in scrutiny,” Amos says. “Because [people with disabilities] are seen as not having a full life, part of the salaciousness was that we’d have lives that were likened to those of normal good Christian folks. There is nothing worse to people’s sense of stability than seeing a disabled person who is thriving.”

Of course, Ronnie and Donnie weren’t the first famous set of conjoined twins. That honor goes to Chang and Eng Bunker, who were born in what is Thailand (formerly Siam) in 1811 and toured the world as sideshow attractions — “Siamese twins” — before passing away at the age of 62. In 2014, on their 63rd birthday, Ronnie and Donnie fulfilled their lifelong goal of outliving Chang and Eng. After that, they added five more years onto their record. “The world will miss them because they were the world’s oldest conjoined twins, and that’s honestly pretty cool,” the twins’ nephew wrote in a recent public post on Facebook. “Our family, though, we’ll miss them because, well, because they were Ronnie and Donnie.”