On a searing Saturday afternoon, a massive crowd in neon beach attire bounces in unison to bass-heavy soca beats at the Miami-Dade County Fair and Exposition grounds 20 miles south of Miami Beach.

Hundreds of revelers, a majority of them maskless, holler and twerk as they slowly inch toward a tractor trailer converted into a roving DJ booth. Surrounded by a battery of speaker boxes, an emcee called out: “Trinidad! Barbados! Guyana! St. Lucia! St. Vincent! Jamaica! Antigua! Virgin Islands! Dominicana!”

Given the partygoers were squished together in tight quarters sharing aerosols, it was a sobering reminder that large parties, even held outdoors, pose a high risk in catching the respiratory disease that has killed at least 56,410 Floridians since the pandemic began.

Texas Republican Allen West, While Hospitalized for Covid, Doubles Down on Anti-Vaxx Rhetoric

After taking a hiatus in 2020, the annual celebration of Caribbean culture known as Miami Carnival returned this past weekend amid a still-thriving pandemic, creating general unease for organizers of large gatherings where social distancing is next to nil. An estimated 30,000 attendees from South Florida, across the U.S., and all over the Caribbean were expected to be on hand for the three-day festival, Joan Hinkson-Justin told Rolling Stone in an interview prior to Carnival.

Hinkson-Justin, chairwoman of the Miami Carnival host committee, said the main precautionary measure was requiring everyone, including media, staff and volunteers, show proof of a negative PCR test dated October 6th or later in order to gain entry. Once on the fairgrounds, everyone had to wear face coverings, Hickson-Justin added. Due to a recently enforced state law prohibiting so-called “vaccine passports,” the host committee could not impose proof of vaccination as a requirement for entry, she explained. 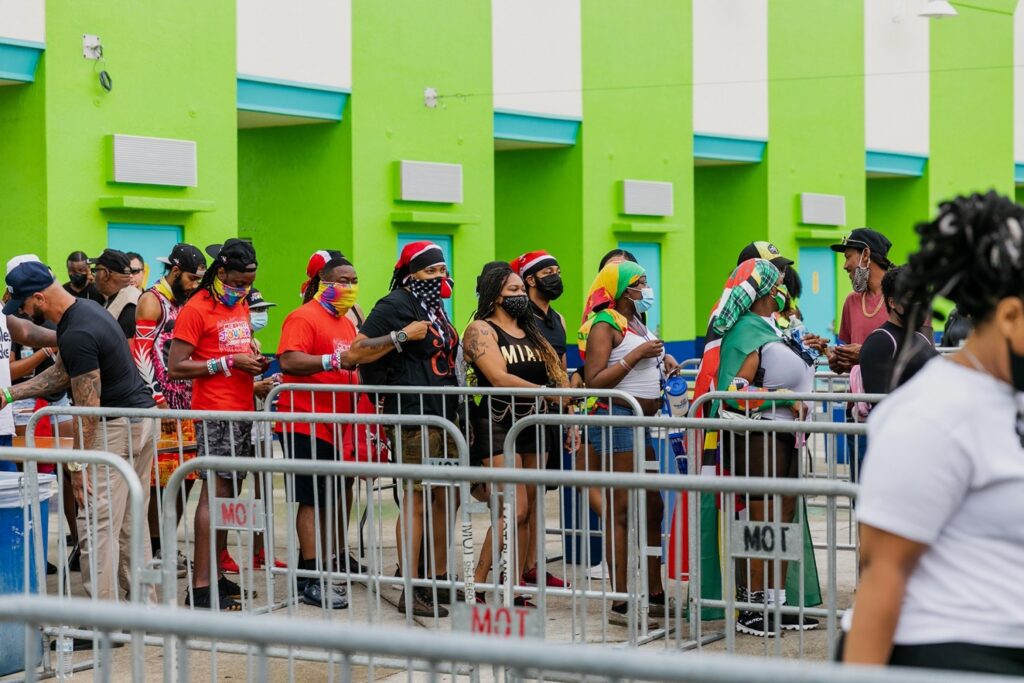 Attendees wait in line to have their Covid-19 test results checked.

“Carnival is not a socially distancing event,” Hinkson-Justin admitted. “By requiring negative tests and face masks, we felt it would be safe.”

If anything, the Miami Carnival proved that even the most well-intentioned Covid-19 mitigation plan can’t stand against the might of rebellious youth dying to party. The event also provided a view into ambiguous skepticism about vaccines from young people who don’t fit the mold of a typical rabid anti-vaxxer.

On Saturday, attendees celebrated J’Ouvert, a parade that sets off Carnival and that involves attendees dressing in vibrant colored beach clothes and dousing each other with neon paint. The vibe was like a Spring Break party on the beach.

Sunday was the main event known as Mas, a choreographed procession that features participants dressing up in ornate costumes and headdresses made of sequins, beads and feathers. A few masqueraders donned face coverings that matched their opulent outfits. While their getups were more sophisticated than the previous day, the attendees were still in full party mode. Throughout the weekend, the skunky aroma of grade-A ganja permeated the fairgrounds and copious amounts of booze poured from tented bars and bars on wheels.

While the host committee largely succeeded on the negative test requirement, a great majority of the festival goers ignored the Carnival’s mask mandate. “I did not see enforcement inside with regards to masks,” 34-year-old New Yorker Ravi Joeloemsingh said. “The testing? Yeah that was good. They checked it.”

Catherine Des Rosiers, a 26-year-old Toronto resident, said she figured Carnival staffers would not enforce the mask mandate once people got through the entrance. “They have to publicize it in a way so the government doesn’t say anything,” Des Rosiers said. “It doesn’t necessarily mean that once you are inside, that it’s something you have to do.”

She is fully vaccinated as a result of being a part-time hospital unit clerk, Des Rosiers noted. But if she had a choice, she would not have gotten her shots. “I had to do it unfortunately because of my occupation,” she said. “I think they are doing a lot of guinea pig trials; using the population as a general test zone. I don’t think it is very fair.”

Some revelers admitted that they had still not gotten jabbed. Irvin Wynter, a 27-year-old who also flew down from New York, said he is still on the fence about getting vaccinated. “I am not sure about it,” Wynter said. “I think there are a lot of people who feel that way here at Carnival. Absolutely.” 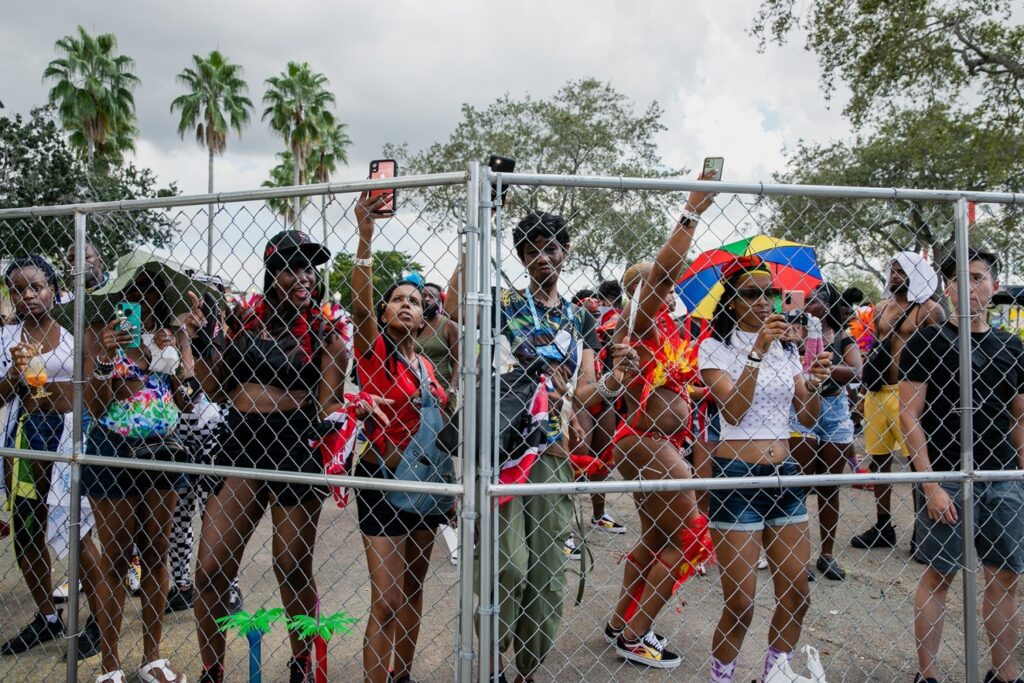 Revelers await outside the gates before Sunday’s parade.

How to handle large gatherings is a dilemma that has flummoxed infectious disease experts and local authorities in the fight to reign in coronavirus infections in a state that has served as a petri dish for new variants, as well as being a case study in politically-motivated treatment of Covid.

Miami Carnival took place on the heels of a waning Delta variant-fueled surge in Florida, while some Caribbean countries are still in the throes of an upswing in Covid cases and deaths.

In her most recent weekly briefing on October 6th, Pan American Health Organization executive director Dr. Carissa Etienne said cases are declining across the West Indies, but Cuba, Bermuda and Barbados, where cases increased by nearly 75 percent last week, continue to report high rates of infection. Jamaica is experiencing its highest-ever COVID deaths, Etienne’s report also noted. Meanwhile, getting shots into the arms of people in the Caribbean has been abysmal as a result of low vaccine inventory and vaccine hesitancy. According to Etienne’s report, only 37 percent of the populations of Latin American and Caribbean nations have been vaccinated, CNBC recently reported.

On Saturday, Florida reported 3,141 new Covid-19 cases, resulting in the lowest seven-day average in three months, according to the CDC. Hospitalizations continued to trend downward with the number of people hospitalized dwindled from 295 to 257, the Miami Herald reported. And 58 percent of the state’s population is fully vaccinated.

Along with other Sunbelt states, Florida experienced a brutal summer that saw record breaking new daily cases, hospitalizations and deaths, mostly driven by the unvaccinated. At the center of the Sunshine State’s coronavirus maelstrom is Gov. Ron DeSantis, who signed into law legislation barring businesses and government agencies from requiring proof of vaccinations, doubled down on his anti-facemask rhetoric by seeking to prevent local school boards from implementing mask mandates on students and appointing a new surgeon general who puts the governor’s own Covid-19 skepticism to shame.

Against this backdrop, Miami Carnival organizers had to revamp the precautionary measures for the three-day event that originally would only have required attendees to show proof of vaccination, Hinkson-Justin said. “We want to make sure that after Carnival ends that everyone is safe from contracting the virus,” she said. “We are doing everything in our power to enforce the CDC guidelines we have put in place.” 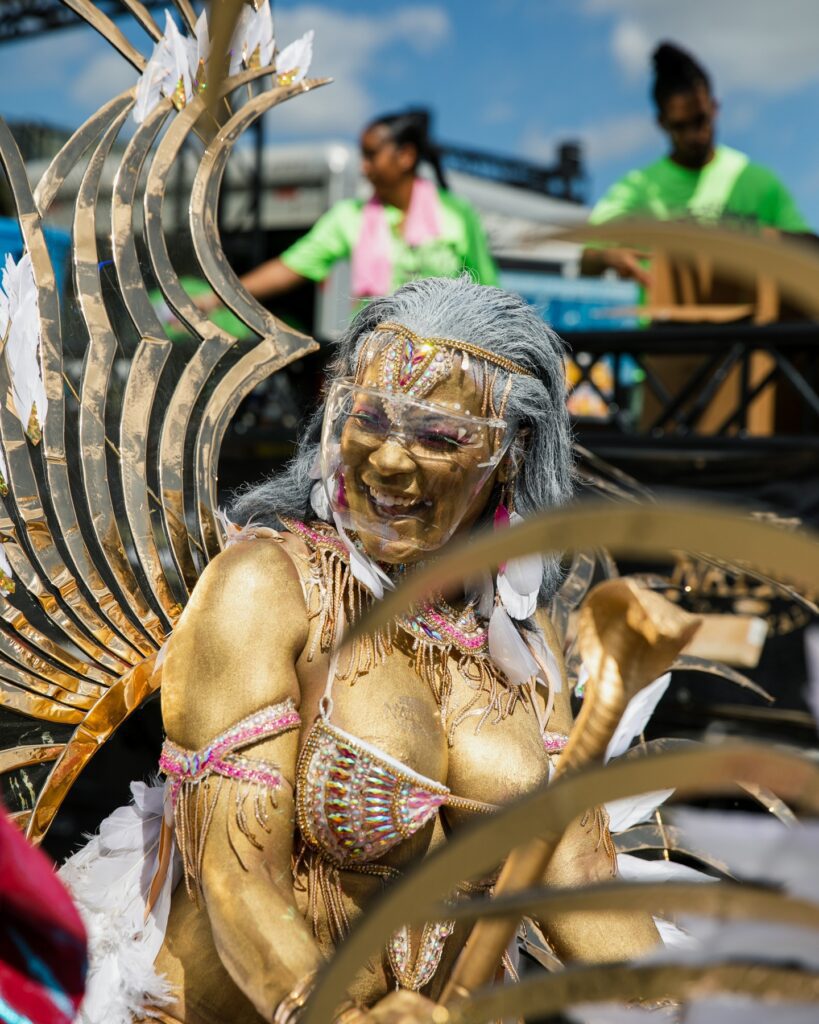 A marcher in Sunday’s parade wears a clear facemask with her gold costume.

Infectious disease experts said Carnival organizers deserved credit for its Covid-19 mitigation plan even though it fell short of keeping everyone masked up. “I think it is judicious to require negative PCR tests and masks even though it’s outdoors,” Dr. Mary Jo Trepka, a Florida International University epidemiology professor said.

Dr. Marissa Levine, an infectious disease professor at the University of South Florida, said providing proof of a negative test would lessen the chances of anyone at Carnival picking up Covid-19. “I think they are doing the best they can given the limitations,” Levine said.

On Saturday and Sunday, staffers and volunteers near the front and back entrances guided festival goers to tents where they had to show their negative test result in order to get a CDC clearance wristband. But security guards inspecting bags and conducting pat downs did not stop people who were not wearing masks from entering the fairgrounds. On Sunday, within the first 30 minutes of the gates opening, 100 attendees had entered without wearing face coverings. Hundreds more who participated in the procession also did not cover their faces.

A goodwill ambassador stopped some of the maskless attendees and directed them to a table where they could pick up paper face masks and personal bottles of hand sanitizers. A few donned masks, but most of them stuffed the face coverings in their pockets and handbags.

Autumn Douglas, a Colorado resident attending Carnival for the first time, said she didn’t have a hard time getting in without a face mask on. “It’s in my bag if I need it,” she said. “Everybody is supposed to get a PCR test so we should all be safe.”

Kezias Wallace, a 20 year-old from Toronto, said he found the testing requirement inconvenient, but necessary. He also dismissed the mask policy as unenforceable given the event was outdoors during two scorching days.

“I am just ready to jump up and party,” Wallace said. “We have waited for so long to worry about [the organizers] pushing rules up our butt.”