Once dopey metalheads, the boys in Weezer are now the reigning pop dweebs of the alternative nation. 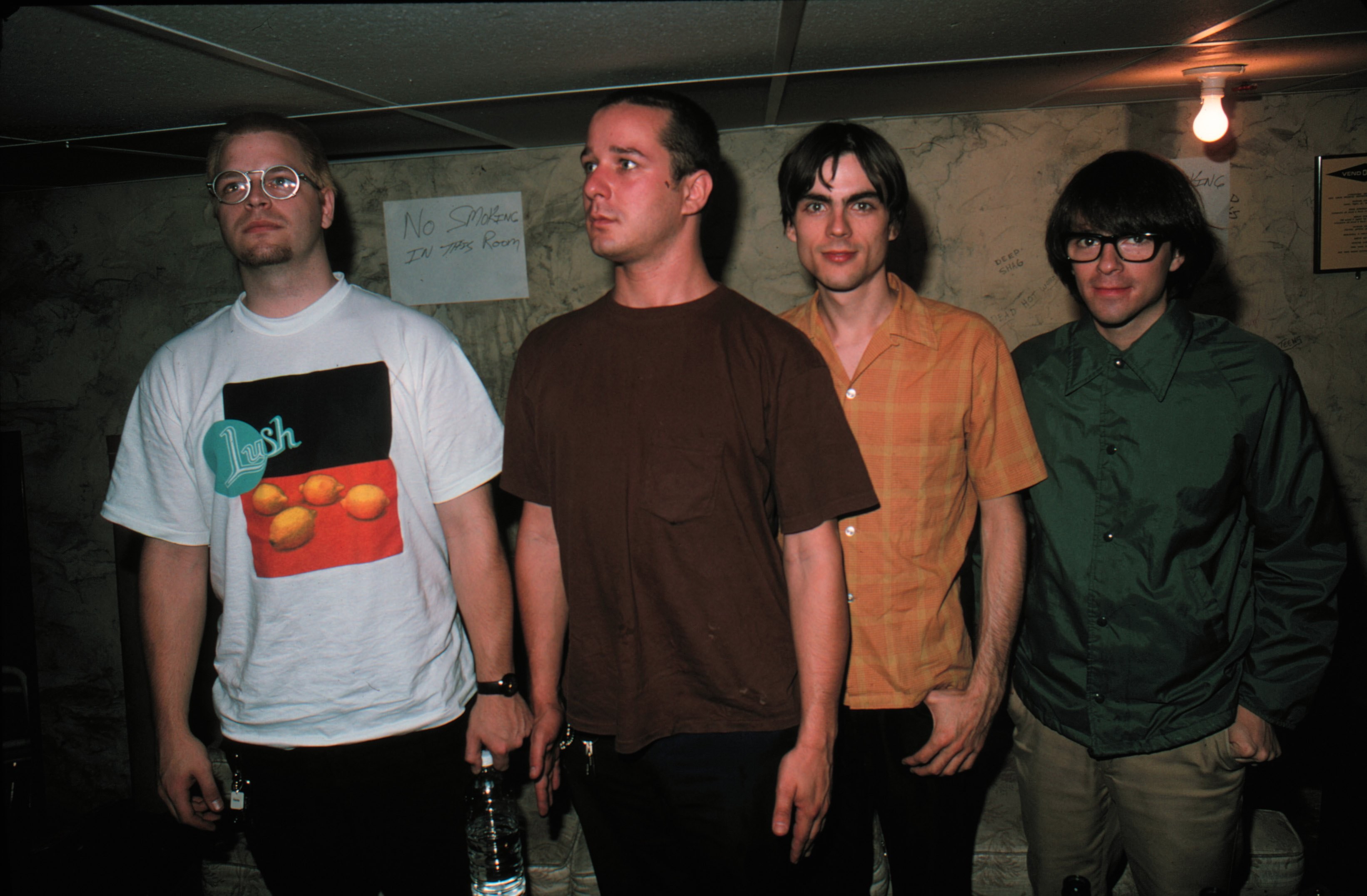 This story originally appeared in the January 1995 issue of Spin. In honor of the Blue Album’s 25th anniversary, we’re republishing it here.

Judging by the thick glasses, Prince Valiant coiffure, and schlumpy demeanor, you’d think that Rivers Cuomo, guitarist and lead vocalist in L.A.’s pop confectioners, Weezer, was born hunched over and talking slack. But you’d be wrong. He was raised, he says, in a Connecticut Hindu community called Yogaville, where everyone meditated and no one ate meat, raised their voices, or cussed. “It was a very mellow childhood,” he remembers. “But when my mom and dad broke up, suddenly my brother Leaves and I had to join the outside world. We even had to teach each other how to swear so that we would fit in at public school.” It was there, in high “I was totally into hair bands,” he confesses. He ended up sharing a house with bassist Matt Sharp and drummer Patrick Wilson. Cuomo had a few songs, the house had a then scrammed across the country to Hollywood with dreams of becoming a metal star. school, that Cuomo devoured every Quiet Riot and Kiss record he could get his hands on, ry garage, Wilson knew most of Alex Van Halen’s drum licks, and Weezer was born. They worked the Hollywood circuit, spending endless nights passing out reams of cheaply photocopied flyers to largely indifferent crowds who smirked with abandon at their rather unusual handle. When one guy doubled over with laughter and bolted out of a club on Hollywood Boulevard, clutching a flyer and screaming “Weezer!” well, “that’s when we knew that we were onto something,” says Cuomo.

On their Geffen debut—a sticky platter of orchestral guitar chimings, Queenish hookery, and alt-rock foolery—Weezer huffs out the kind of pop candy that delights the college kids and burns the hairs off most indie-rock purists. But that inescapable single, “Undone—The Sweater Song,” with its monolithically lightweight choral hook, is so catchy that those same indie snobs probably find themselves whistling the damned chorus while fumbling through their next dog-eared fanzine purchase. It’s the kind of song that will invariably end up on some K-Tel greatest alternative rock compilation, or become a football cheer, or the first J. Crew ad jingle. Weezer is unabashedly pop—and the boys sure do look cute frugging with that pack of dogs in their Spike Jonze-directed Buzz Clip.

Sprawled in a dressing room at NBC studios in Rockefeller Center, the band is trying to play it cool but it’s not working all that well. Weezer is about to make its debut on Late Night With Conan O’Brien with that song. Sharp has become inseparable from a childhood friend, guitarist Brian Bell paces skittishly around the room, Wilson cracks wise with a stream of coarse jokes, and Cuomo curls up in fetal position.

“I’m so nervous, I’m probably gonna crap in my pants when we play,” says Wilson.

“I wonder if the TV audience is ready for us?” asks Bell gleefully.

After a mind-numbingly insipid skit, Weezer is on. As the band whizzes through “Undone,” the boys in the control room nod their heads and whistle along, the Max Weinberg Seven do their best to look like they’re into it, and ’60s kitsch icon Adam West (a.k.a., Batman) breaks out into a huge grin and waves.

“That was so surreal,” says Cuomo after the song is over. “TV, a studio audience full of squares, and Batman! I mean, Batman gave us the thumbs-up! I guess that there aren’t many mysteries left now.”

Weezer Bring the Metal With ‘I Need Some Of That’