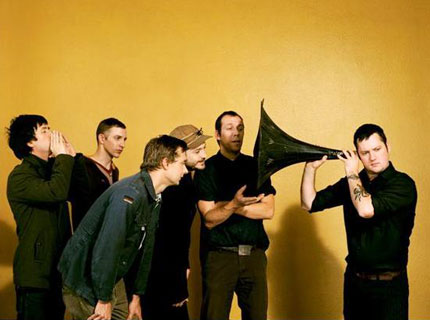 Stepping out from this summer’s must-see tour with R.E.M. and the National, Modest Mouse have mapped a headlining U.S. jaunt all their own, set to kick off June 23 in Miami, FL after over a month on the road with Michael Stipe and co. From there, the brief outing, toting the Dirty Dozen Brass Band on most dates, will hit cities like Orlando, St. Louis, and Norfolk in continued support of their latest album, We Were Dead Before the Ship Even Sank.

After a five-year absence, SoCal punkers the Offspring have announced the June 17 release of Rise and Fall, Grace and Rage, the quartet’s eighth studio album to date, set to arrive courtesy of Columbia Records. For a preview taste of the new record, which was produced by Bob Rock (Metallica, the Cult), head to offspring.com to snatch up a free download of “Hammerhead,” the album’s first single.

After scrapping sessions for her follow up to Back to Black, Amy Winehouse — who may soon find herself behind bars! — has shelved her only remaining project: the collaboration with Mark Ronson on the theme tune to the forthcoming Bond movie, Quantum Solace, U.K. tabloid The Sun reports (via NME.com).

“We did work on it but we never finished it,” Ronson said. “I don’t think it will happen unless by some miracle it gets recorded and someone sings on it. I’m not sure Amy is ready to work on music yet.” Winehouse’s spokesperson added, “Mark presented a track to Amy, but she had other ideas about the direction it should take.” Well, maybe these guys should take a swing!

Remember That Time ‘South Park’ Made Fun of an Overly Sensitive Music Publication?

Live at the AXE White Label Collective Event Part I