Descendents’ Milo Aukerman Is Still Punk on the Ukulele 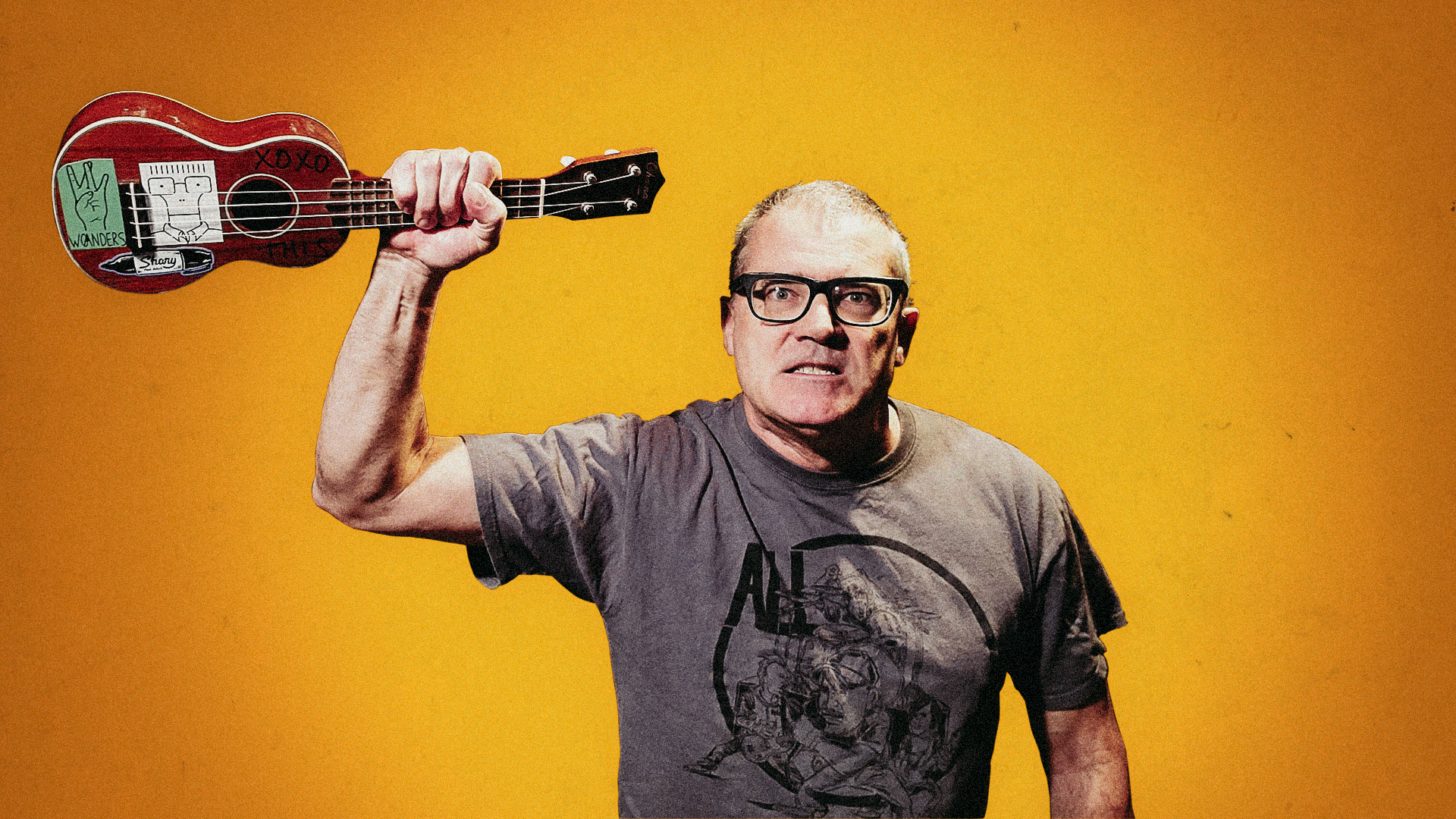 Through the power of restraint, Descendents’ Milo Aukerman has managed to publicly keep quiet about his politics — and subsequent outrage — during each of the 1,356 days that Donald Trump has been president.

As November’s election rapidly approaches, Aukerman, who, over seven albums, has mostly kept politics out of his buoyant, neutral music, is allowing this simmering indignation to be heard with RebUke 45…not a LP, a trio of fervent, to-the-point protest songs – all performed on the ukulele.

The songs were originally intended for a new Descendents record, but Aukerman says that he’s unable to sit on them any longer, experiencing a sense of urgency to release the three-song single under the RebUke moniker ahead of the election.

“I hope it helps people come to their senses,” he tells SPIN from his Delaware home. “I originally wrote them because it was on my mind and I had this shit I needed to get off of my chest. And then after having written it, I thought these songs could maybe be put out there and maybe do some good. Maybe they could give people something to hang their frustrations on.”

For a singer like Aukerman, the ukulele may seem a bit idiosyncratic. But since the early ’80s, the instrument has been a major nucleotide in the Descendents’ DNA, a satiating, go-to songwriting tool whenever inspiration struck.

“It travels really well in the back of a van and it’s small and you can whip it out any time,” explains Aukerman who has built up an “arsenal” of ukuleles including a bass uke as well as a guitalele which he is wielding to write his band’s next album.

SPIN: I was so impressed by how much passion came across on these songs via the ukulele. Your anger is really apparent.
Milo Aukerman: Yeah, I wanted them to still be punk if it was possible to be that way. At least two of them were actually done by the band and were just sitting there, waiting for the rest of the album to be finished and written. So two of them already had a treatment that was aggressive and that came across even though they were played on a planky ukulele.

I think you might have changed how the instrument will be viewed.
Yeah, you’re right – most people might think the instrument lends itself more to images of Tiny Tim and his music. But I wanted to avoid that by using a six-string ukulele called a guitalele and it allows you to get more of a guitar-like sound even though it’s a hybrid. I just love the way it sounds and it gives you a different sound from a regular acoustic, keeping that punk aspect.

It’s just kind of part of our thing as Descendents. We even have that line, “Here in my van, I can play the last tape, play my small uke.” I wanted to embrace this instrument so I started acquiring different ukes that were bigger and more versatile than the standard uke.

Do you think that, in some ways, its subtleness helps convey your emotions and message more powerfully?
I don’t know. I guess there’s the notion of the singer-songwriter with his guitar…the idea of Woody Guthrie and “This machine kills fascists.” That’s a lofty goal and I don’t feel like I’m that folky, sort-of protest singer. But I’ve always put more emphasis on the lyrics. That’s mainly because a lyric is what inspires me to usually write a song. Lyrics can maybe be better conveyed in that acoustic format where the words are front and center and the music is an accompaniment to what’s being said.

I know that a new Descendents album is in the works. What’s energizing those new songs? Politics as well? The pandemic?
Yeah, I did write a song about COVID recently, but I still write songs about everyday circumstances. For me, those have become the most cherished and worthy of my songs because they’re not too political and that can be hard to do these days. Like when I drive my car and it goes across the yellow line too many times, a notice comes up with a little coffee cup on my dashboard that says, “Please take a break.” I thought, “That’s cool. If I drive erratically, I get a coffee cup,” so I wrote a song about it. [Laughs.] I like writing those [songs] when I get the inspiration because the Descendents are all about being goofy whenever we can.

On top of being goofy, the band is also known to be chronic coffee drinkers. Did you ever feel like outcasts because you weren’t partying and doing drugs, and were buzzing off of coffee instead?
We came into punk rock for the pure energy of it and weren’t as interested in the fashion or even the social part of it. We came into it not wanting, necessarily, to make friends or be popular – we just wanted that explosive energy. As such, I came into it as a nerd, Bill came into it as a pariah on campus because he would come to school smelling like fish as he was a fisherman. [Laughs.]. So, we were all kind of outcasts and I felt like in punk rock we could be outcasts. But I never felt like we had to live up to some preconceived notion of what a punker was. We played punk rock but never considered ourselves as punks, per se. That’s how we didn’t fall into that trap of doing drugs or wearing mohawks – for us, it was all about the music. Whatever that could facilitate the music, that’s what we were going to do and that’s where the coffee came in.