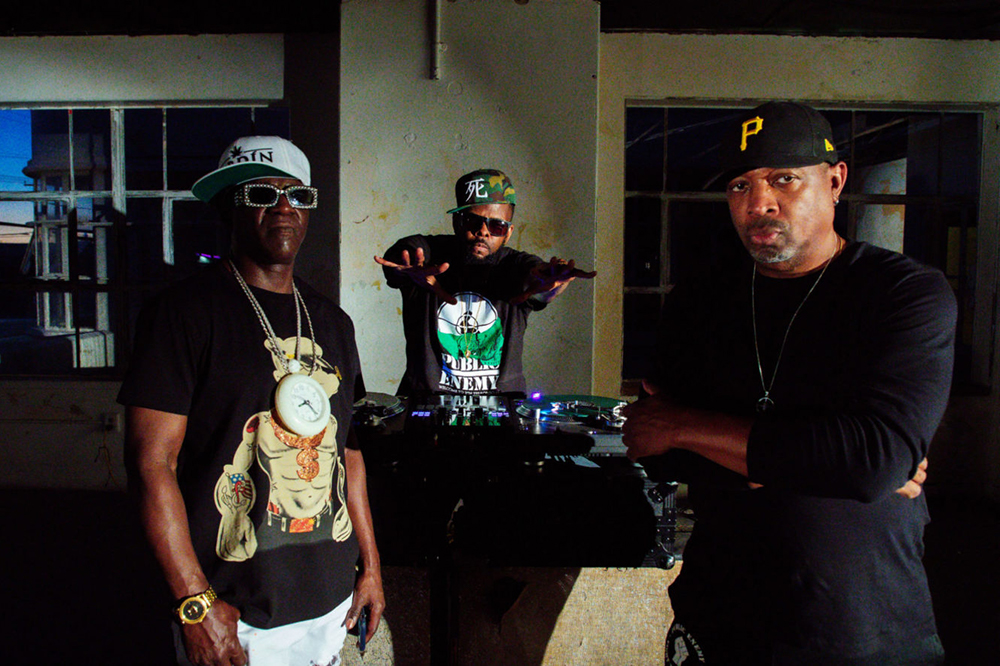 In a world where little makes sense anymore, Public Enemy suddenly reemerging to release a fiery new song on Juneteenth actually makes a lot of sense.

Early on Friday morning, the legendary hip-hop pioneers released their latest song,  “State of the Union (STFU),” with a video to go along with it. It marked the first time that Flavor Flav returned to the equation after a very public dispute over Public Enemy Radio’s appearance at a Bernie Sanders rally earlier this year.

But as Chuck D sees it, it’s Flav returning to what the pair does best: An unflinching condemnation of what the scumbag administration of the day has done now. It’s something Chuck has been outspoken about ever since forming Prophets of Rage with Cypress Hill’s B-Real, and three-fourths of Rage Against the Machine (Tom Morello, Brad Wilk, and Tim Commerford) in 2016.

The song’s title is something Chuck has mulled over for a while, though.

Even while on tour with Prophets of Rage, Chuck kept some ideas “in the shed” for Public Enemy material, and this was one of them.

“State of the Union (STFU)” was [recorded] within the past month in one take timed to come out on Juneteenth. Chuck and DJ Premier, who had toured with Europe late last year as part of the Gods of Rap tour, had been tossing ideas back and forth for a while. The first result was this song, and as Chuck sees it, had to drop right now with its message perhaps never being more pressing. Though he’s admittedly more economical with his rhymes at age 59 (“I don’t have to go through any fantastic wordplay”), he’s still surprised how quickly things came together.

“You got to fight for the world that you want to see that you gotta fight for the world. You gotta be it,” Chuck says. “You want to be able to live life but you want it to be equal for a lot of people to enjoy it. The entire world has a lot to go around for everyone and the fact that it doesn’t, it means that there’s always some kind of fuckery at the top. I was talking about things like this with Premier last year and it was a no-brainer. I told him, ‘You pick the track and I’ll nail it.'”

Besides the group’s bombastic message, which came as no surprise, the appearance of Flav was. But it wasn’t news to Chuck.

“The whole thing was simple: you can’t not not work for 10 years, you gotta work,” Chuck says of his longtime collaborator. “It’s his Goddamn job. But he’s my guy, I take care of him. You can’t email in your work although you could fly a verse in nowadays, but you got to work. And that’s the job and nobody does it better than him.”

The urgency, though, reflects Chuck’s anger toward President Trump (and celebrity politicians at large) and the desire for him to leave office immediately.

“I think when it came to Public Enemy dealing with Donald Trump, it’s like, “Yo, man, at 60 years old like me and Flavor, that’s our focal point to say like, ‘Dude, we don’t even want to wait to November,'” Chuck says. “You gotta do the Nixon and get the fuck outta there and back to the USFL. Unfortunately, the middle of America bought the Kool-Aid from this dude who’s a straight out Three-card Monte hustlin’ New Yorker.”

As much as he’s encouraged by the protests in big cities, what’s most striking to the Public Enemy leader is how the progressive movement has taken hold of smaller towns across the country. Seeing the small towns involved is, to him, is what will cause real change.

“At the end of the day, you know, you want freedom, justice, equality for all,” he says. “So if those three things are up on your, on your mantelpiece up on your clipboard, you know, and it’s not about that one voice or two voices. I like the fact that and the media, you see a lot of different voices speaking truth to power. It’s a beautiful thing to see a lot of voices out there.”

Songs That Reflected the Civil Unrest Then and Now