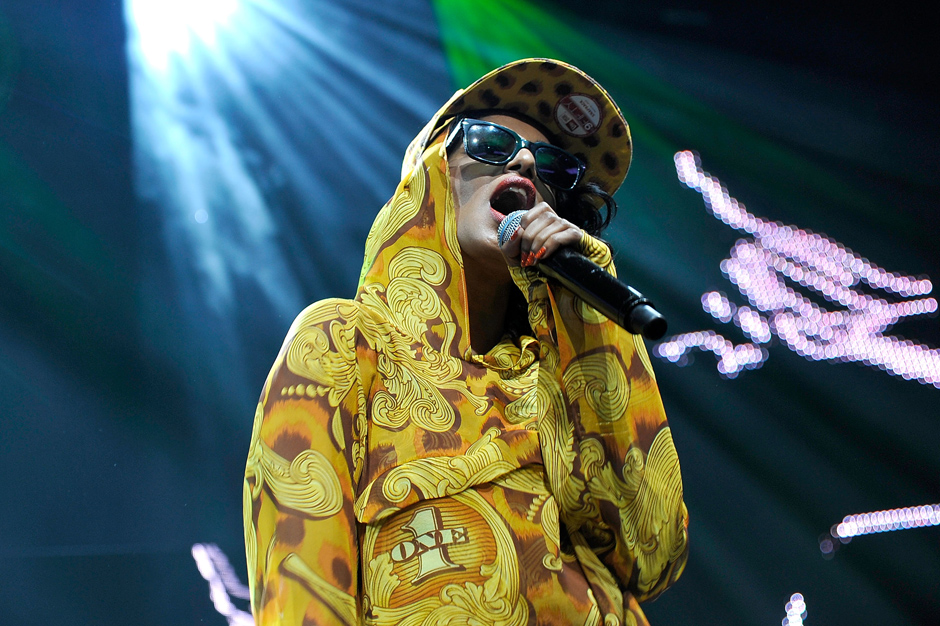 Way back in February 2012, a certain Sri Lankan rapper raised a few hackles by flashing a finger during a certain televised football game. Sure, it was the ever-controversial M.I.A., the middle digit specifically, and Super Bowl XLVI, which drew nearly 167 million viewers via NBC’s broadcast. But the world shrugged it off and moved on. We got over it far faster than Janet Jackson’s “wardrobe malfunction,” and didn’t care half as much as Bob Lefsetz did about Beyoncé’s crotch.

As it turns out, the NFL did not forget, and they haven’t let Maya Arulpragasam either. It’s now come to light that the football league — whose average team is worth $1.17 billion, says Forbes — is seeking a $1.5 million payout from the Matangi-maker on account of her gesticulation supposedly amounting to a breach of contract, and a tarnishing of the institution’s “goodwill and reputation.” The NFL took action on March 13, 2012, and M.I.A. had planned to stay quiet.

In speaking with The Hollywood Reporter, Arulpragasam’s lawyer Howard King explained they’d hoped the complaint would fizzle in arbitration before reaching an actual courtroom. Neither NBC nor the FCC has shown interest in pursuing action against M.I.A., but at recent as last week, the NFL pushed for a summary judgment from the American Arbitration Association to move the thing on to a proper trial where the fight for monetary damages would begin.

The league also wants a public apology. Instead, a public shaming: “Until now, we had reluctantly remained quiet in the hopes of not becoming subject to the whims of 28 rich NFL owners who wanted to crush this brown, outspoken young lady,” said king. “Especially since they are making her life miserable for the cost of a 30-second spot in one of this weekend’s secondary games. But ultimately, we could not be forced into the type of public apology demanded by the NFL.”

The outcome of the “secret legal war” (THR) was expected to be a settlement for the “offensive gesture … in flagrant disregard for the values that form the cornerstone of the NFL brand,” but none came, so M.I.A. is plotting a counter-offensive. Says King: “She is going to go public with an explanation of how ridiculous it was for the NFL and its fans to devote such furor to this incident, while ignoring the genocide occurring in her home country and several other countries.”

As for justifying the breach of contract, the league’s lawyers claim that their January 30, 2012 agreement with M.I.A. required that she “acknowledge the great value of the goodwill associated with the NFL and the tremendous public respect and reputation for wholesomeness enjoyed by the NFL [and that she] ensure that all elements of Performance, including without limitation [her] wardrobe, shall be consistent with such goodwill and reputation.” Perhaps her glove slipped off?

Speaking of, the complaint also alleges that “M.I.A., as a member of the public and a noted member of the music entertainment industry, was unquestionably aware of the adverse consequences sustained by the NFL, and the public outcry provoked, by the Janet Jackson ‘wardrobe malfunction’ during the halftime show at Super Bowl XXXVIII.” They say her bird-flip was a “blatant, intentional, and calculated” attempt to gain the sort of publicity they are about to experience.

King, for his part, replied, “Of course, the NFL’s claimed reputation for wholesomeness is hilarious. In light of the weekly felonies committed by its stars, the bounties placed by coaches on opposing players, the homophobic and racist comments uttered by its players, the complete disregard for the health of players and the premature deaths that have resulted from same, and the raping of public entities ready to sacrifice public funds to attract teams.” Oh snap.

M.I.A. and King are also calling for examples of ways in which the NFL — “its stars, coaches, advertisers, broadcasters, team doctors, and owners” — has damaged its own damn self over the years, in hopes of “balancing the playing field” and removing “the burden of undertaking a formal survey of the history of unwholesome behavior.” Because we wouldn’t want to get our hands dirty now, would we? Those submissions can be sent to [email protected]