"Going on tour for a year is one of the more soul-crushing experiences you can have," he says. "It's like being trapped in a stale ashtray for most of a year." 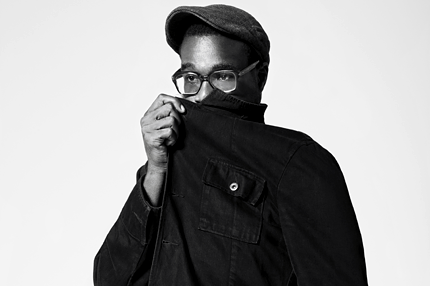 After ten years in TV on the Radio, it’s not surprising that lead singer Tunde Adebimpe requested time off following a yearlong tour supporting 2008’s Dear Science. He just doesn’t remember asking for a hiatus. “That was weird,” laughs the 36-year-old over a bowl of soup at a Manhattan café. “I didn’t realize I’d announced that until I saw it printed somewhere. I was like, really?” He used the time to pursue collaborations and, by his own admission, “chill out.”

His renewed energy is on full display in Nine Types of Light, TVOTR’s typically inventive fourth album. A day before jetting off to L.A. to shoot a video, Adebimpe discussed where his diverse interests might take him next.

The first song on the album is actually “Second Song.” What gives?
I think it’s fitting. It just works better that way. Once it’s on shuffle, no one will really care.

True. You’re shooting a video for every track on the album, right?
We’re constructing a film to go along with the record. It’s basically going to be a video for every song that’s tied together by a shorter film that I’ve made.

What’s the rationale behind that?
The idea behind the visual element is, I feel like it’s increasingly dissatisfying for me to just make music.

When did you start feeling that way?
That might have been a result of just going on tour after the last record. Playing shows is really fun. And writing music is really fun. But going on tour for a year is one of the more soul-crushing experiences you can have as a creative person. It’s like being trapped in a stale ashtray for most of a year. It’s not a balanced way to live.

Sounds like burnout.
A lot of burnout. Everything’s okay now. This is probably my favorite record that we’ve made and the easiest time we ever had making one. It’ll be fun to go back out this time. But last time, the question “What am I doing here?” definitely popped up a lot for me and for other people in the band.

Was there a falling-out within the band?
No. We are so close as friends when we’re not on tour. But it’s the kind of thing where, when we’re done, it’s like, “I never want to see any of you guys again.” And then a week later you realize, Oh, but they’re my four best friends. Who else am I going to call?

What did you do with your time off?
I took a lot of walks. Went to the park. Very boring, normal stuff. Musically, though, the nice part about being home is when someone calls and says, “You want to do something on my record?” you can actually do it. Like, I got to do guest vocals on a Lee “Scratch” Perry record. I could walk away from music now because that’s pretty cool.

Anything different about the way you guys wrote songs this time out?
I think Kyp [Malone] wrote a couple of songs in the studio. It’s something I envy and admire because there’s no way I can do that. I wrote all of my songs while messing around on Logic [Apple’s music production software] and making demos. That’s the nice thing about not being on tour, too — I actually wanted to write again. To end the conversation about touring, there’s a part of you going, “I’ll never write another song again if it means that, to make a living from it, I’ve got to drop everything and tour.” To move into a gym locker with a bunch of disgruntled dudes for a year, it really starts scraping away at whatever creative source you have inside of you. You should definitely have a refresh button to get outside of it. [Pauses] Do other people talk about this? Am I the only one who cries about the endless repetition of touring?

Yes, you are the music industry’s only whiner.
That’s totally me. I’ll totally take it.

Your bandmate Dave Sitek has been collaborating with Jane’s Addiction. Is there a classic alt-rock band you’d want to work with?
No.

Great answer!
It’s true. I’m just thinking that for part of my life, I was pretty absorbed by that music. It just occupies a certain space and time in my mind. When I was a teenager, I looked up to these people. So it would be weird. Sometimes it’s not a good idea to meet someone that you like a lot.

Speaking of which, TVOTR’s first album was titled OK Calculator. Did Radiohead send you a cease and desist letter?
Not at all. Probably because it’s not very good. Probably because they’re like, “This is obviously a joke on so many levels — musically, primarily.” I would love to have gotten that letter, though. That would have changed the course of wanting to be in a band if Radiohead had sued us into oblivion for a silk-screened CD-R. It would be like finding out there’s no Santa Claus.

Before TVOTR, you worked with Amy Sedaris in a movie called Jump Tomorrow. Did she give you any advice?
She said, “Don’t fuck with me.” Which was great. I should apply it more in my day-to-day life.

He Said, She Said: An Interview With John Lennon

TV on the Radio, Bon Iver, the KIlls, and More to Perform at David Lynch’s Festival of Disruption

A Party That’s Over Before It’s Begun: Sleater-Kinney’s All Hands on the Bad One Turns 20